Doctor Who’s Peter Capaldi lifts off with new companion Bill: ‘Their adventures spin out of control’

U.K. Shows
by Bianca Williams
Peter Capaldi is in action for what will be his last series as The Doctor before his Time Lord regenerates in the Christmas special later this year. And he’s very excited for viewers to at last meet The Doctor’s new companion, Bill Potts, played by Pearl Mackie…

“It’s very interesting because Bill’s a classic companion in my eyes, because she doesn’t know anything at all about the Doctor or space or time or Daleks or anything, so he’s able to adopt an almost kind of a teaching role in sort of showing her these delights that are available to him. But of course their adventures spin out of control because it’s The Doctor.”

This series kicks off with an episode called The Pilot which sees the Doctor on Earth, with his assistant Nardole, the lovable alien played by Matt Lucas in the last two Christmas specials, who will now appear in every episode of this series…

“The Doctor’s not raging around time and space when we meet him,” explained Peter. “He’s becalmed and trapped and so he’s had to take a job as a lecturer at a university. He’s a very popular lecturer, but he never really quite stays on the subject of science – he wanders off all over the place so his lectures are always packed because he’s very amusing. He meets lots of students, and then he comes across Bill who works in the university canteen.”

Bored serving chips all day and forever fretting over her unrequited love for her close friend Heather (Jekyll and Hyde star Stephanie Hyam), Bill has become obsessed with The Doctor. So when Bill, who’s openly gay, and Heather discover something curious lurking in a puddle she calls upon his help. It’s not long before the Doctor brings Bill into the TARDIS, alongside Nardole, to escape a strange ‘water creature’, and they flee to Australia, followed by a rocky planet 23 million years in the future, then straight into the middle of a battle involving those classic Doctor Who enemies, the Daleks…

“Bill of course didn’t know anything about the Daleks so introducing them to her led to some funny scenes,” said Peter. “It doesn’t happen very much this season, but if we do come across something old The Doctor’s able to tell her about it while also sometimes making gags that aficionados of the series will recognise.” 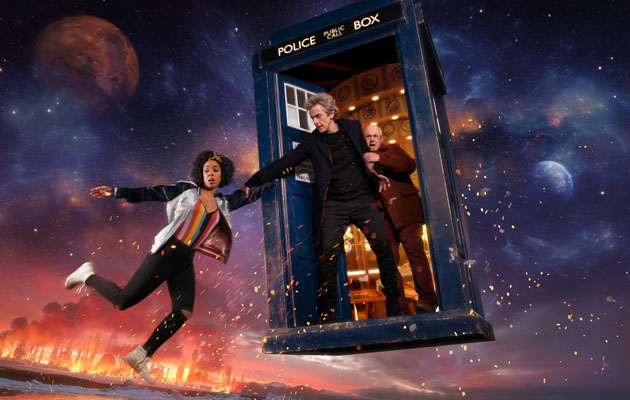 Triple terror on the TARDIS for The Doctor, Bill and Nardole

There are some new locations for filming this series, with a futuristic second episode shot around the vast museum complex in Valencia, Spain. The team also head back to Tenerife for warm weather shoots, while the Brecon Beacons double for Roman Britain…

“We also just went to the same quarries and pits in Wales!” laughed Peter. “We have plenty of locations to choose from and I’m always amazed what can be recreated.”

Peter said knowing he’s leaving the show at Christmas made him change the way he’s attacked the role during this series. He remains tight-lipped about who should replace him as The Doctor, however, and he’s not keen to speculate.

“I’ve never been one to rest on my laurels and in a way one of the reasons that I’m leaving the show at this point is I think it’s hard to sustain this level of creativity and volume of work. When you’re doing the series it takes over your life.

“I didn’t want to make the decision for a long time because I like being the Doctor so much, as it’s really fun. But I found it quite hard to be constantly doing the same thing. I will like to move on when we do stop filming in July.”

Read a complete episode guide to the ...