Home›U.K. Shows›Danny Mac has a revolting habit and Strictly partner Oti is not amused

They look in total harmony on the dance floor, but Strictly duo Danny Mac and Oti Mabuse are at loggerheads in rehearsal 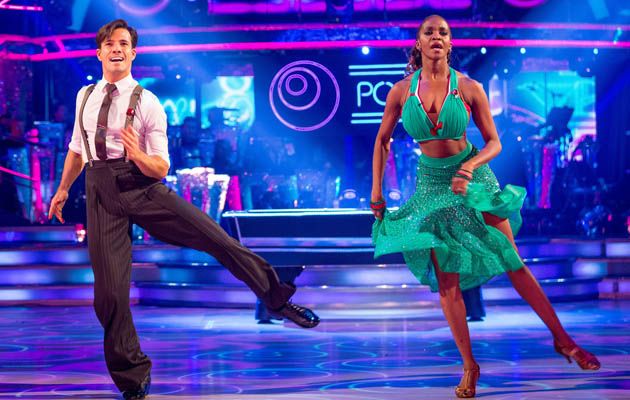 Actor Danny Mac may be known as the series heartthrob in Strictly Come Dancing, but his dance partner Oti Mabuse has revealed he has a less than appealing habit that keeps repeating on her.

The professional dancer told the Press Association that being up close to Danny all day long was not as good a job as some viewers of the show may imagine, because he won’t stop burping in her face.

She said: “He burps in my face all the time. When I’m talking, I feel like I just ate his lunch – honestly, all the time.

“He could walk away and burp over there. Then, after he burps, he wants us to continue dancing in that area where he burped.”

Danny said: “It’s a bodily function, it could be a lot worse.”

As one of the strongest contestants in the show and with two perfect scores under his belt, Danny has been criticised by some for his previous dance experience compared to others in the competition.

He said: “I went to drama school, but never as a dancer, and I started when I was 18, so when I was training with people who were dancers already, I was never going to be up to standard – hence why I never got employed as a dancer.

“It was never these styles of dance, but it has maybe helped with my ability to pick up steps and my co-ordination and it helped me a lot in comparison to someone like Greg (Rutherford) who had never danced before and became the most improved person on the show.

“But I can’t take anything away from Oti because if you could see me on Tuesday you wouldn’t see any difference between me or Greg, it’s just what you can achieve in that week.”

The former Hollyoaks star said that performing live had not got any easier: “The build-up to it is terrifying beyond all explanation. I can’t even begin to describe how scary the prospect of going out on a Saturday is.

“It doesn’t happen easily – I really wish people could come and watch us train because it’s so full on. Maybe once the show is over we’ll be able to tweet a video of a routine from a Monday and then show the performance from the Saturday because they wouldn’t believe it, it’s such a difference.”

He went on: “The only one I felt really rehearsed for was the Cha Cha because it was the first one we did and we did it for three weeks.

“All the other dances it went from three weeks to four days and that becomes incredibly scary, so when on a Saturday it does go right, the feeling is amazing because you feel like you’ve defied all odds.”

Danny, 28, also said that seeing people knocked out of the competition was becoming increasingly difficult.

He said: “There’s not been one person who’s been not bothered, or been a pain in the a**e, so you’re honestly gutted for them because everyone wants to stay, everyone’s enjoying the experience, no one wants to go.

“Early on you felt like it was because no one really had a proper shot at it, so you were gutted for them because they only had a few weeks and later, you felt like people had had a good experience, but everyone this year deserves to be in the final.”

Strictly Come Dancing continues on Saturday at 7pm on BBC One.