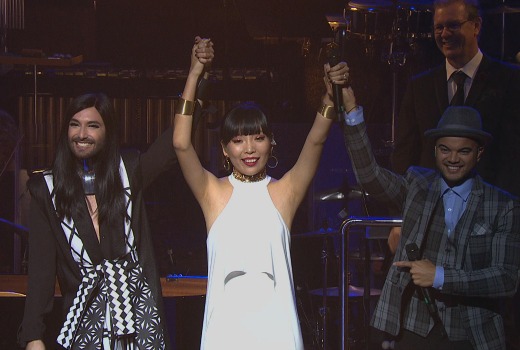 X Factor winner Dami Im will represent Australia in Stockholm at the Eurovision Song Contest in May.

The song she will sing will be released worldwide by March 11.

Dami Im said: “I am so thrilled and honoured to be representing Australia at Eurovision this year in Stockholm. I am really excited to be following in the footsteps of Guy Sebastian and Jessica Mauboy who have both graced the Eurovision stage before me.

“I truly believe that the Australian public and Eurovision fans around the world are going to love the song I will be performing in Sweden. I cannot wait to showcase it to the world and represent Australia to the best of my ability!”

Australia was welcomed back to Eurovision after the European Broadcasting Union agreed that SBS’ associate membership and the response to 2015 earned another invitation.

“The feedback we got from viewers, fans, press and the broadcasters after Australia’s participation in Vienna was overwhelmingly positive,” says Jon Ola Sand, Executive Supervisor of the contest on behalf of the EBU. “We strongly believe the Eurovision Song Contest has the potential to evolve organically into a truly global event. Australia’s continued participation is an exciting step in that direction, “It remains to be seen what such an event may look like in the long run,” Sand continues.

But this year Australia will have to qualify through the second Semi-Final on Thursday the 12th of May.

SBS Managing Director Michael Ebeid said, “Australia has embraced the Eurovision spirit for over 30 years on SBS, but we’re a competitive nation, and last year with our very own contestant to cheer for and a chance of winning, Australia was completely captivated by the contest on the other side of the world. Reaching over 4 million Australians, it was our biggest Eurovision audience ever.

“We’re thrilled to be welcomed back to the Eurovision family this year, and Dami is the perfect artist to take that next step for Australia on the world’s biggest stage. The essence of theEurovision Song Contest is about bringing countries together for a celebration of their diversity and culture through music, and it’s that element which resonates so strongly with SBS’s own purpose.”

In case Australia wins the 2017 contest will be co-hosted by SBS and another European public broadcaster, somewhere in Europe.

The contest will be broadcast on SBS’s Eurovision Weekend – 7.30pm Friday 13, Saturday 14 and Sunday 15 May, with the prime time broadcasts featuring artist interviews and behind the scenes clips.