Home›U.K. Shows›Call the Midwife’s Jenny Agutter: ‘Demotion is a real slap in the face for Sister Julienne!’

Call the Midwife’s Jenny Agutter: ‘Demotion is a real slap in the face for Sister Julienne!’

As Call the Midwife returns on Sunday, it's all change at Nonnatus House with a new face in charge. And Sister Julienne's not happy, as actress Jenny Agutter reveals...

Call the Midwife star Jenny Agutter on how Sister Julienne copes with being demoted, plus welcoming new arrivals… and missing old friends.

As Call the Midwife returns for its sixth series this week, Sister Julienne and others are back at Nonnatus House following their trip to South Africa at Christmas. Did you enjoying filming there?
“We had the most amazing time. I remember after one day’s filming we were heading back to set in the back of this truck. It was quite a way back to set, but the sun was setting, it was a gorgeous light and we just sang and laughed the whole way back. I’ve been very lucky in my life, I’ve had all sorts of wonderful experiences and you don’t expect there to be more and more. But that is one of those moments that will always stay with me. It was very special.”

In the first episode, we learn that Sister Ursula (Harriet Walter) will remain in charge at Nonnatus House – above Sister Julienne! How does she feel about that?
“Having just got back from South Africa so full of joy, this is a real slap in the face for Sister Julienne to have to deal with what seems like a demotion. I must admit, I was really uncomfortable about having to give my office up – it’s my little place of sanctuary.” 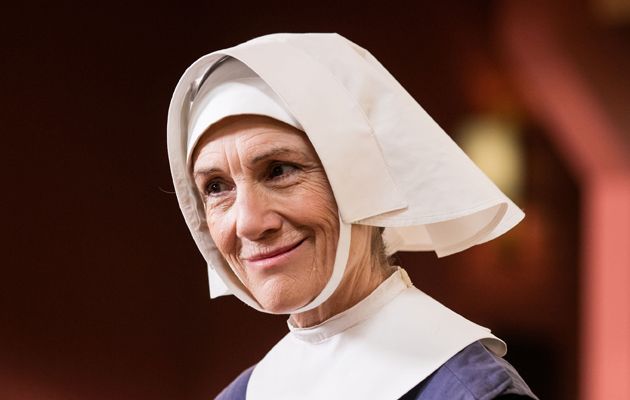 Sister Julienne is always so polite – is she able to keep her frustration under wraps?

“Yes, she has to sit on quite a lot in terms of her faith and she probably thinks it’s a test and just something she has got to deal with and with good humour. She’s just trying to find her way round the best parts of it all.”

Harriet Walter certainly ruffles a few feathers as Sister Ursula. What was it like working with her?
“I hadn’t worked with Harriet before, but I know her through events and stuff. But I can confirm she’s completely a delight and rather different from her slightly severe character!”

This week’s episode centres on heavily pregnant mother-of-one, Trudy Watts, whose husband Lester has just been released from prison for extortion. What more can you tell us about their relationship?
“There’s a definite case of domestic abuse here. The story focuses on an East End family not unlike The Krays, but is seen very much from the feminine point of view. Trudy’s a strong woman being held back by this family and her cruel husband.” 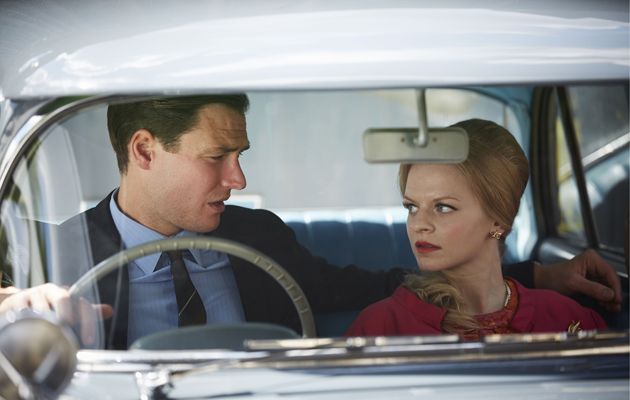 “Julienne has a great friendship with Mary Cynthia because she sees her as this person who has this strong faith and who’s really coming along. But we discover there are all sorts of problems there.” 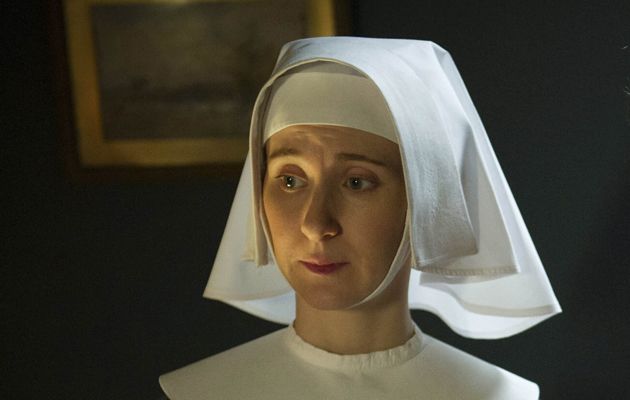 Fans were left shocked last series by the sudden death of much-loved character Sister Evangelina, played by Pam Ferris. Have you missed having Pam around on set?

“I really have. I wrote to her the other day saying I miss you, particularly at the dinner table. When we are all round the dinner table there’s a lovely mix. It’s very funny and the girls do make me laugh a lot, but Pam had another way of being and a different take on things that was so funny!”

Who’s the worst now for getting the giggles?
“Charlotte Ritchie, who plays nurse Barbara Gilbert, screams with laughter if I swear or say anything that is at all outside of being a nun. It’s a bit like being Queen, which must be hell. Who wants to be Queen anyway!”

Call the Midwife returns on Sunday, January 22 at 8pm on BBC1.

CBB fans are freaking out over Kim ...

Debbie Dingle’s back in Emmerdale ‘with a ...