But what about Million Dollar Minute? 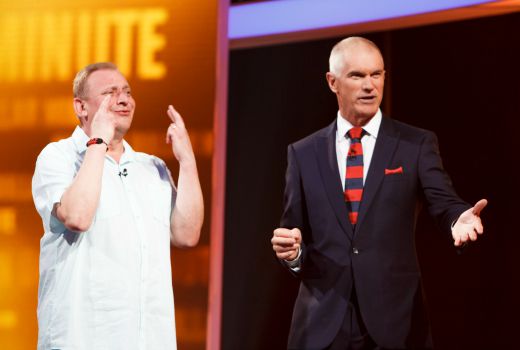 With Seven promoting upcoming gameshow The Chase for September, it is yet to clarify the future for Million Dollar Minute.

TV Tonight understands production concluded some time ago as it ramped up filming on the new ITV game show, hosted by Andrew O’Keefe. $MDM appears set to end its run at two years.

Both have been filmed at Media City studios in Coventry Street South Melbourne (formerly Global Studios), also home to Dancing with the Stars.

The Chase is tipped for a 5pm timeslot, but Seven has given no indication if Million Dollar Minutewill ever go back before the cameras. Despite some respectable ratings, the internally-devised show has been unable to knock off Hot Seat in the crucial lead-up to the 6pm news.

Host Simon Reeve has done a gallant job of keeping the show alive after the abrupt exit of original host Grant Denyer.

Another version is also in production in Vietnam and the Aussie version was sold to TV3 in New Zealand.

But the apparent end is all very déjà vu. When Million Dollar Minute was being launched, trying to get clarity on plans for Deal or No Deal was nigh on impossible. After production on 11 seasons wrapped without much fanfare, it was simply moved to 5pm as repeats.

Chase host Andrew O’Keefe, who can be one of TV’s more polarising hosts, is amply skilled in the genre. Who else could muster such enthusiasm for opening brief cases for over 2000 episodes?

The Chase will feature 4 brains trusts, Goliath, the Supernerd, the Shark and the Governess, who will take on contestants in the battle for big bucks -and hopefully big ratings.

‘It’s impossible for me to even imagine ...