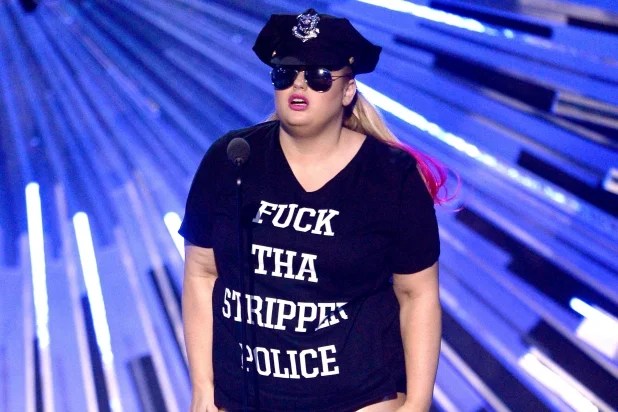 onstage during the 2015 MTV Video Music Awards at Microsoft Theater on August 30, 2015 in Los Angeles, California.
Aussie comedienne started her bit in a profane t-shirt: “A lot of people have problem with the police, but I really hate police strippers”

Not many people seemed to find Rebel Wilson‘s police strippers bit all that amusing during Sunday’s MTV Video Music Awards. One of the leaders of the #BlackLivesMatter movement, DeRay Mckesson, was chief among those detractors.

“A lot of people have problem with the police, but I really hate police strippers,” Wilson said, while wearing a “Fuck Tha Stripper Police” t-shirt. “You guys know what I’m talking about. They come to your house, you think you’re getting arrested, and you just get a lap dance that is usually uninspired!”

She continued her bit: “I hired police stripper for my grandma’s 80th, and he wouldn’t even feel her up…. I hate this injustice, hence the shirt.”

The attempted gag was a play on N.W.A.’s song “Fuck Tha Police,” which has seen a resurgence as of late thanks to hit biopic, “Straight Outta Compton.” Unfortunately, for Mckesson and others, the setup hit way too close to home.

When's the last time you heard a Holocaust, Sandy Hook, or Columbine joke at an awards show? Exactly. https://t.co/mBnjbra3QP