Home›U.K. Shows›And then there were four… The story of The Great British Bake Off quarter-final 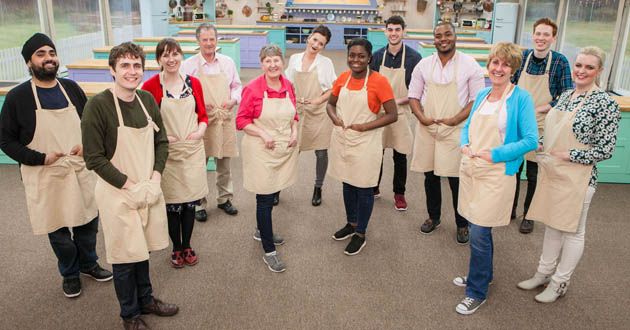 Benjamina Ebuehi has become the eighth contestant to be eliminated from The Great British Bake Off after foods from the Tudor period proved to be her downfall.

The 24-year-old from London had previously impressed judges Paul Hollywood and Mary Berry with her intricate flavours and baking techniques.

But she failed to master Tudor week and was handed her marching orders.

Benjamina said: “It was an absolutely amazing experience – intense and exhausting but so much fun at the same time.

“My family and my twin sister were thrilled that I got to the quarter-finals, and they are really, really proud of me.

“I didn’t want to leave in week one and I also really wanted to get star baker somewhere along the line, so I feel I have achieved those two things!”

This week the bakers were given three all-new challenges – having to create a display of shaped pies for the signature bake, a dozen Tudor jumbles in the technical and a marzipan centrepiece for the showstopper.

Paul thought Benjamina’s chipotle pork and spiced black bean pies looked a bit ‘rushed’, and her attempt at jumbles saw her end up in fourth place out of the five remaining contestants.

The judges also noted that the maze on her marzipan showstopper was rather simple and Paul thought it felt ‘quite doughy’.

Benjamina admitted it was her ‘least favourite’ bake – and vowed never to tackle another dish from the Tudor period.

She said: “I just hate marzipan, I think the taste is horrible and so I didn’t enjoy that bake at all, it was my least favourite bake of the whole show.

“I will never ever be making a marzipan cake again.”

She added: “I’m gonna keep on baking, no marzipan, no Tudor ever in my life.”

She said her highlight had been clinching the coveted star baker title in week four, when Mary praised her churros.

Benjamina also revealed that she has put her teacher training on hold while she explores baking opportunities.

She said: “I think it is because Bake Off has given me new confidence to take my baking to a different level, and I just want to go for it now.

“I would so love to have my own coffee shop one day with my own bakes – that would be my ultimate dream.”

There was better news for Bake Off hopeful Candice Brown, who clinched the coveted title of star baker.

The 21-year-old from Bedford wowed the judges with her ox cheek and oyster and macaroni cheese pies, and she scooped first place in the technical with her jumbles.

But it was her marzipan peacock in the showstopper that really took the judges’ breath away.

Paul deemed it ‘exceptional’, telling Candice: “You have ticked all the boxes and then some.”

“You have really cracked it,” added Mary.

Benjamina will join Jo Brand on The Great British Bake Off: An Extra Slice on Friday October 14 at 9.30pm on BBC Two.