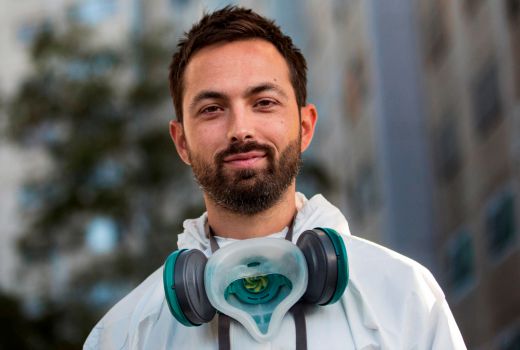 Twisting the Dragon’s Tail tells the incredible story of the rock that shaped the modern world. From its creation in an exploding star before Earth existed, to its deployment in nuclear weapons, nuclear power and nuclear medicine, this three-part series reveals how, in a single generation, uranium went from something virtually unknown to becoming the most desirable and terrifying rock on Earth.

The series is presented by Australian-born, Canadian-raised physicist Dr Derek Muller, creator of the hit YouTube science channel Veritasium, which has over 2.5 million subscribers and 140 million viewers. Throughout his journey, which includes ventures through nine countries, Derek unleashes a historian’s passion for detail, a physicist’s understanding of science, and a journalist’s instinct to uncover a fresh look at this controversial subject and reveal for the first time a complex, poignant story.

Episode One: The Rock that became a Bomb
At the turn of the 20th century, uranium is virtually unknown and basically worthless. Dr Derek Muller embarks on an adventure to reveal how, in just a single generation, uranium transforms into the most valuable and terrifying rock on Earth. The discoveries of scientists such as Marie Curie, Ernest Rutherford and Albert Einstein unlock the secrets of the uranium atom, and allow us to peer into the very nature of the universe. Then one clear morning above the city of Hiroshima, the world is changed forever.