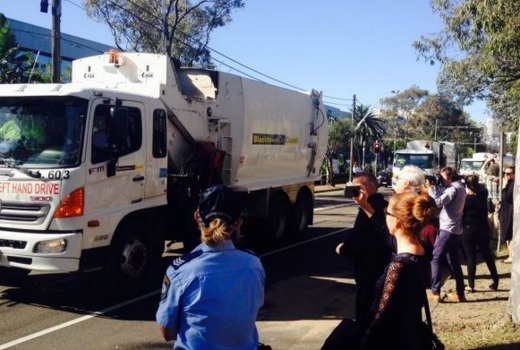 Media interviews, a petition, a garbage truck protest and a smear campaign were part of a concerted campaign to derail Struggle Street on SBS last May -all ignited by a 1:40 minute promo released on Facebook.

Last May SBS was in the eye of a media “shitstorm” that is hard to forget. This week at the Australian International Documentary Conference in Melbourne SBS Commissioning Editor John Godfrey and Series Producer David Galloway took time to reflected upon the hurdles, mistakes and lessons learned from the controversial series.

Prior to the 3 part series being broadcast, Godfrey says SBS felt the series would be a hard sell. After all, how many viewers would want to sit down to a factual series on the disadvantaged?

“We had low expectations about the series because it was a tough watch,” he said.

“There was no marketing money whatsoever.”

But a promo -that notoriously included a fart- drew plenty of attention, especially from Blacktown Mayor Stephen Bali who rang SBS to complain.

Galloway and KEO Films had spent 15 months with the participants, including the Kennedy family, who featured heavily in the show and promos. The family had also been granted a private preview screening. With less than a week to go, Godfrey headed to Blacktown Council to offer another screening.

“I got there and was ushered into the council chambers where there were 30 people sitting there waiting for me,” he recalls.

He remembers one statement that underpinned municipal anger.

“’This show is going to affect our real estate values and commercial investment in the area,'” he was told.

“I think that’s a really important point to remember.”

“Somewhere in the shitstorm they were turned and persuaded that perhaps they’d done the wrong thing, and given the area a bad name,” he explains.

“I think their neighbours were angry at them for letting the cameras in for such a long time.”

“We hadn’t created this climate of fear. It was the mayor.”

A petition began online and Blacktown sent out a press release offering the Kennedys to whoever wanted them to her from them. But worse was to come.

In the lead up to the midweek premiere, Godfrey was attending the Logies when he heard there would be a garbage truck protest.

“I spent most of the time not in the room, but on the phone to KEO and lawyers, and people internally, to work out a strategy,” he explains.

There were genuine duty of care concerns for the participants and production staff.

“We had plans in place for security and relocation. But we hadn’t created this climate of fear. It was the mayor.” 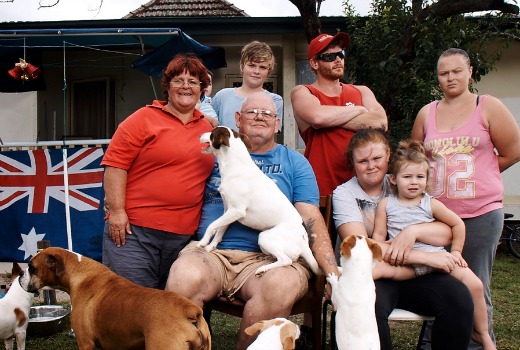 With outrage headlines, Struggle Street chalked up a whopping 7700 mentions and articles -worth millions in advertising. It was in every news and radio bulletin for 48 hours.

“Obviously there were quite a few internal meetings about it. No one knew where it was going to end,” says Godfrey.

“There was a fear of a mob mentality having been whipped up, by the mayor and certain sections of the press,” Galloway agrees.

“There was a real fear it could get out of control. It was quite scary.

“It was a tsunami of media accusations levelled against us so it was impossible to respond in any meaningful way.”

A psychologist who had worked on the show visited the participants.

“Peta (Kennedy) was pretty apologetic saying, ‘I have to say these things to protect my family because we’re copping so much abuse.’ That was distressing for us that the family was being brought into it,” Galloway assures.

“We actually just wanted to narrow the window to be honest.”

Even before the first episode aired a decision was made to screen the second and third episodes as a double the following week. Godfrey now reveals it was to stop the angst from dragging on.

“We actually just wanted to narrow the window to be honest. That was why we did it. It was gratifying because in the 9:30 episode the audience grew. So if you were worried that people only came for the controversy, it wasn’t true,” he says.

“We knew when it went to air the conversation would change. And it absolutely did,” Godfrey defends.

But while not everybody will agree there was complete unison, SBS points to some positive outcomes.

Community hub Graceadas Cottage in Bidwill, a suburb of Mt Druitt, was inundated with gifts, money -and even a renovation from A Current Affair, which had previously targeted the show. Other participants benefited through employment, donation of a car and improved self esteem.

But one young man’s ice addiction continues to be a struggle, while another was targeted by social media.

“Regrettably we’ve lost contact with her. So I think it was tough for her,” Galloway acknowledges.

“The tabloid press and social media are going to go you.”

His advice to other producers tackling controversial subjects is to be prepared.

“The tabloid press and social media are going to go you. It just seems to be a national sport these days that the media will go after one of their own.”

While Galloway said SBS support was unwavering, he also attributed the shitstorm to the promo SBS ran, with footage taken out of context.

“A lot of the heat was generated during that period. By the time the first episode, and certainly the second, had gone to air it had almost completely dissipated,” he says.

“I probably wouldn’t allow a fart in the (promo) again,” Godfrey concedes.

“One of the lessons would be that the tone of the (promo) didn’t work. It wasn’t representative. But you could argue that it did a good job. It got people to watch it. But we wouldn’t do that sort of (promo) again.”

If there is a second series -and most observers believe there will be- SBS isn’t saying. A KEO source told TV Tonight they were in discussion with the broadcaster. Standard spin for neither confirming, nor denying.

There’s little doubt all the players learned much from the 2015 experience: headlines, stress, tears, arguments, meetings and even job security. Documentaries are not for the feint-hearted.

“I was fearful of my job, I must admit,” Godfrey admits.