Home›News›Agents of S.H.I.E.L.D. Revealed Ghost Rider's Origins While Leaving Us With So Many More Questions

Agents of S.H.I.E.L.D. Revealed Ghost Rider's Origins While Leaving Us With So Many More Questions

While the big draw in Monday's episode of Agents of S.H.I.E.L.D., the show's only new episode in the month of November, was the reveal of what exactly happened that fateful night that Robbie Reyes (Gabriel Luna) became the Ghost Rider, the Marvel series threw us for one hell of a loop when Ghost Lucy and, as it turned out, Robbie's surprisingly evil and power hungry Uncle Eli put their plan into motion and gave Eli the alarming ability to create matter with the simple flick of his hand. Oh, and they somehow disappeared Coulson (Clark Gregg), Fitz (Iain De Caestecker), and Robbie in the process. 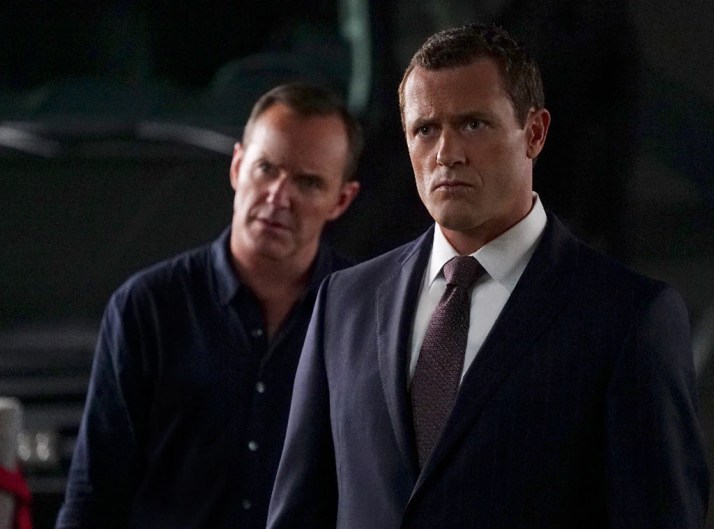 That's right—after the massive blast of energy made its way through the facility, none of our heroes left inside at the time of the blast were where they stood just seconds prior. At least not to the naked eye. So, where did they go? We've got some time to wonder—and a Doctor Strange film to see to hopefully gain some insight into Marvel's new mystical world—before we find out, but our money's on those boxes that were once keep Ghost Lucy and her comrades contained. Are they ghosts now too? We'll see.

And while we're wondering where our favorite agents are, there's another to add to the list. Where in the world did new director Jeffrey Mace (Jason O'Mara) send poor Jemma (Elizabeth Henstridge) off to with a hood over her head? Might she be en route to a certain Sanctum Sanctorum in NYC?

Now, about that big Ghost Rider reveal. It turns out the night Gabe (Lorenzo James Henrie) was paralyzed from the waist down, he was riding shotgun with Robbie in Uncle Eli's Charger on the way to a drag race when the car was firebombed and shot up before it rolled, ejecting Robbie from the car before killing him. As Gabe remembered it, a good Samaritan arrived on the scene via motorcycle and rescued them both. But as Robbie explained it, as he lay in the street dead, a voice came to him, asking if he wanted to opportunity to get back at the men who killed him. When he said yes, that's when the motorcycle man appeared above him, transferring his curse to Robbie. Johnny Blaze, was that you?
Making things even more tragic, Ghost Lucy revealed to Robbie just before he killed her that the attack wasn't even meant for him. Rather, her husband had hired a hit on Uncle Eli after the two began to compete for the ultimate power offered by Darkhold. Something tells us that when Robbie comes into contact with his uncle, it's not going to go so well for the man keen on playing god. After all, who better to challenge a makeshift god than the Devil himself?

Where do you think Coulson and Fitz wound up? Theories on Jemma's whereabouts? Share them in the comments below.