Home›Australian Shows›ABC News Breakfast: “There’s a lot of light in it.”

ABC News Breakfast: “There’s a lot of light in it.” 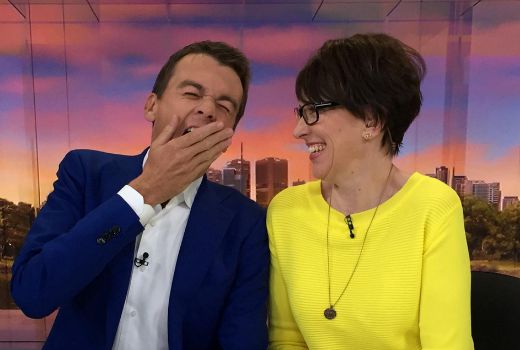 Striking the right balance between light and shade in Breakfast television is no mean feat. Just ask Virginia Trioli and Michael Rowland.

On ABC News Breakfast there’s no cash give-away, no pop-star concerts, no international junkets and no nudie runs by the hosts. The perception of the show is that it offers an oh-so-serious alternative to Sunrise and Today, but that’s not entirely true according to the ABC duo.

“We still have a classic ABC audience who will smack us around the head sometimes if it’s ‘Too much fun!’

“Finding the balance is difficult!

“If there’s a chat-point from a page 3 basement story you might get someone saying ‘I don’t tune in for that, I tune in for the news!’”

“But equally we get people saying ‘That’s fantastic, more of that!’” Rowland says.

“Everyone’s needs have to be met, so it’s fine,” Trioli continues.

“Some mornings are relentlessly bad news and we just look at each other and think ‘Enough! We have to lighten the mood!”

In addition to overnight news and politics, there are interviews with authors, actors, singers and sports stars. There’s a Friday ‘confab’ panel, guest performers, film reviews and regular experts.

“There’s more of an embracing of the other aspects of our lives,” Trioli suggests. “There’s regular segments and conversations with experts coming in with topics on health and welfare, medical issues, that sort of thing. We have a Life Coach, Andrew May, who comes on now.”

“He’s great. He gives us tips on our day to day life which we listen to and ignore!” Rowland laughs.

“We sit there feeling miserable, thinking, ‘You’re right, Andrew!’ And then go away and live our messy lives,” Trioli agrees.

“It’s much easier to get big names”

“I don’t think there’s a scheduled programme at the ABC that’s gone up (as much),” says Trioli.

“But we get that anecdotally every morning with the number of people interacting with us on Facebook and Twitter.

“We are getting access, probably as a reflection of our audience numbers, to better guests in politics, film, music. It’s much easier to get big names.

“Virginia interviewed Ralph Fiennes, and I sat down with The Eagles earlier this year –both of whom would have been out of our reach, previously. Not so much ignoring us, but just going where the market is. Now the market is coming to us in terms of that audience growth.”

It’s shifting in politics too. While the show has always had access to junior politicians, it can now attract more front-benchers -with some qualifications.

“This has been a very tightly-controlled (Abbott) government, compared to previous ones. We used to be able, with previous governments of all political stripes, ring up a minister directly and know that you could get them on. They hold them very, very close now,” Trioli explains. 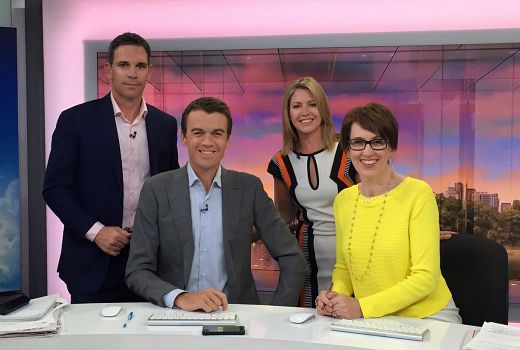 The show has been on air since 2008, with Trioli, sports presenter Paul Kennedy and weather presenter Vanessa O’Hanlon as original cast members. Rowland joined in 2010, while the weekend edition features Andrew Geoghegan and Miriam Corowa.

“The team has been in place for a while now. We know each other, respect each other and like each other. We enjoy each other’s company. The feedback I always get from people is how well we get along. It’s not fake or forced. So I’m very glad that comes across,” Trioli explains.

“People clearly feel like they’re included in a group of people who enjoy themselves. That spirit is hard to create if it’s not organically there.”

“When you say something that’s truthful, that’s very powerful.”

Their own day begins at the more ‘respectable’ hour of 3am. Recently Trioli raised eyebrows when she told viewers she found a thief in her car, early one morning. She even persuaded him to wait for the police to arrive, conceding later it may not have been the best-advised action.

But she shared the incident with viewers on air.

“When you say something that’s truthful, that’s very powerful. If you try and manufacture it, it will just land with a thud and not go anywhere,” she continues.

“I was a little bit on edge when I came in and someone said ‘You have to tell that story.’ But we never let it take over the show, we quarantined it to a certain part because we have work to do. It’s a way for us to say ‘We’re not 2 dimensional people, we have a life like you.’

“We don’t seek that kind of extraneous publicity, but they are moments of our lives. You can’t help it when you have 3 solid hours on air.

“Who you truly are will come across whether you like it or not.”

ABC News Breakfast airs 6am AEST weekdays on ABC / ABC News 24 and 7am on weekends.

The Knick: Watch the Tick-Tocking Trailer for ...

Hollyoaks: Louis is on the Warpath! (Wednesday)