The Wizards of Aus 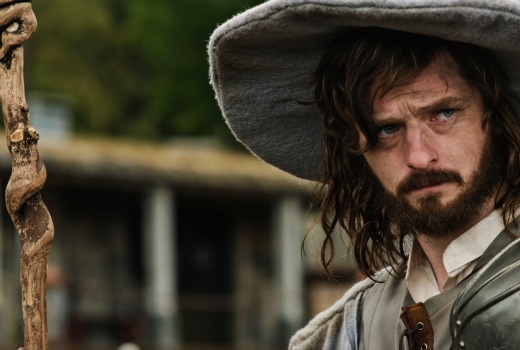 The young, bearded Jack (Michael Shanks), resembling something straight out of Lord of the Rings, is a wizard with haphazard powers known to cause disasters at inopportune moments.

With TV host Morgan Wright (Guy Pearce) daring to expose him on The Wright Perspective, Jack concedes, “I just want to be normal,” and settles on an unassuming life in Melbourne’s Westerns suburbs.

But foes from his magical past move in next door in a blazing, towering abode, wreaking havoc and wheelie-bin wars.

Welcome to , an anarchic, zany mix of fantasy in suburbia. Think Dungeons and Dragons in Footscray and you’d be in the ball park.

This three part comedy is directed by Shanks, aimed straight at fans of role-playing, cosplay and various underworld movies. That’s not a feat one would attempt without adequate CGI and animation tools and The Wizards of Aus steps up to the plate on that front. It opens with a Hollywood-style battle of ghouls and warriors, with weapons, explosions, blood, winged creatures, aerial shots and orchestral music -all no doubt achieved on a shoestring budget.

As Jack, Shanks makes an unassuming loveable-loser wizard. He’s not shy of a few sardonic quips and struggles with local council bureaucracy. There are some pointed social metaphors with local senator Geoff Quinn (Mark Mitchell) opposed to an unearthly intake of outsiders and Jack conceding, “I know that there are a few bad apples….. most of us are all good salt of the earth pointy-hat folk.”

Whilst it’s grand that Guy Pearce brings some star cachet to this humble project, I found his TV host both pompous and very distracting. In a show where there’s a lot that’s deliberately over the top, that’s saying something.

But in addition to a horde of background gags and pop culture references, it’s safe to say there’s nothing else on TV like The Wizards of Aus. For a broadcaster that’s brought us Wilfred and Danger 5 this casts its own unique spell on SBS.

The entire series will also be available via SBS On Demand immediately following its premiere.