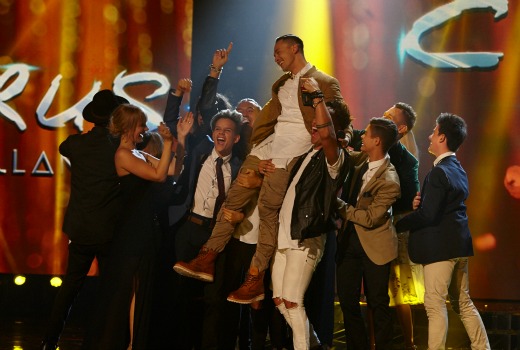 The Wollongong teen was the favourite to win the talent quest, barely putting a foot wrong across the series.

“This whole experience has been unreal. I can’t thank everyone enough,” he said.

Cyrus’ mentor Chris Isaak said, “I’m so proud of him.”

“You’re a star, you have everything,” Guy said.

James told him, “You have the voice of an angel.”

Dannii added: “You have something that moves people. It’s always a celebration in everyone’s hearts and souls.”

“It’s been a great pleasure riding on your coattails. You are a fantastic, strong and beautiful musician,” Louise Adams added.

“These guys are so talented. When they sing, it moves you to the core,” said Guy Sebastian.

The grand final saw Dannii and Kylie Minogue reunited on stage for a performance of Christmas disco track 100 Degrees, plus Jason Derulo, Rudimental and James Blunt.