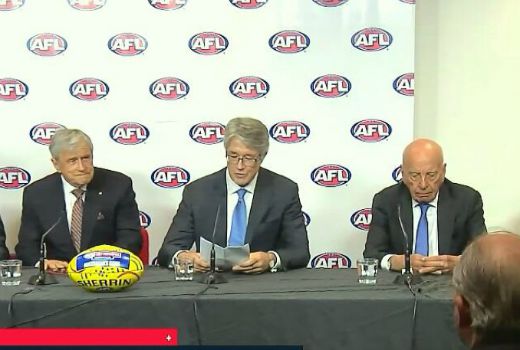 Seven, News Corp and Telstra have secured a historic AFL broadcasting rights in a six year deal worth $2.508B.

The AFL‘s deal from 2017-2022 is the largest in Australian broadcasting history and will give Seven Free to Air rights, FOX Sports Pay TV rights, and Telstra the digital rights.

Key points of the deal:

Kerry Stokes, Chairman of Seven West Media, said: “Seven and the Australian Football League have a long-standing and deep connection. We are delighted to confirm our partnership with theAFL and look forward to working closely with them as we expand our coverage over the coming decade.

“The signing of this agreement forms a key part of our company’s plans for development and underlines our commitment to the future of broadcast television as we build our media presence over the coming decade.”

Tim Worner, CEO of Seven West Media, added: “We are delighted to extend our partnership with the Australian Football League. The AFL is the biggest football code.

“The new agreement for the 2017-2022 seasons make strong business and financial sense for us. It forms a key part of our plans for the future and will be a significant platform for Seven as we build on our leadership in broadcast television and the delivery of audiences, and build new businesses which will drive our future as Australia’s leading integrated media and communications business. The media landscape is changing. Our agreement with the AFL is a cornerstone of our plans to lead that change in Australia.

“AFL fans know that Fox Footy provides superlative coverage of their game, with both great match coverage and informative and entertaining magazine shows that cover every aspect of the competition.

“This deal builds on the strong set of rights Fox Footy has today and ensures that the channel will be the only place where you can see every game of every round, including the final series (excluding the Grand Final), live for many years to come.

“If you love AFL you need to be a Foxtel subscriber, and with our recently reduced pricing there’s really no reason not to sign up.

“Under this deal, for the first time, Fox Footy will be able to be broadcast on all devices, which means that if you subscribe to Foxtel Play or use Foxtel Go, you’ll now be able to watch all games on PCs and Macs as well as tablets, phones and games consoles.

“Foxtel is very proud of its association with the AFL and we look forward to providing an even better service to the League and its millions of fans.”

The announcement follows Nine securing the NRL rights to 2022 in a deal worth $925m. NRLnegotiations with FOX Sports are continuing.

Neighbours first: just 3 characters for an ...